Three days of intense focus. Three days of waking early to Coach Knight’s wake up calls. Three days walking seven miles while carrying clubs. This is three days of competitive college golf. As much as we love the competition in the end it is taxing. Normally, we are baggy eyed, yawning and tired, but after the Goodwin things were different. The Goodwin Invitational was hosted by Stanford University, and as you would imagine it was a great tournament with many of the top teams in the country competing. If this was a normal trip, the tournament hosts and coaches would rush to cram as much golf as possible into a two day period, crown the winner, and send the players back to school to attend morning classes the following day. This week we had a slightly a different agenda however and each one of us would be in for a treat of a lifetime.

Last week as normal, we received an email that included the schedule for the trip. After the three round tournament in Palo Alto, the itinerary detailed two extra days which included one day of golf at the Preserve Club in Carmel, CA and a second day at an unknown “mystical golf club” that the team could only speculate as to what course this could be.

Following the final round of the Goodwin, we drove 1.5 hours to the small, quaint town of Monterey, CA. Exhaustion overrode curiosity and the mystery of the mystical golf club would have to wait another day. The lights were off and the eyes were shut within minutes of entering our rooms. The night seemed short as a blink however as the realization of what the next two days would be kicked in just before the buzz of the 6:30 AM alarm. After a shower, shave and bite to eat we all grabbed our clubs and embarked on day one of our tour of the Carmel Valley.

Our drive to the gate of the Preserve Club took just over 20 minutes from downtown Monterey, but once we reached the gate we were only half way from the hotel to the clubhouse. After entering the property we followed the 9.1-mile two-lane road that twists and turns to the clubhouse. The Preserve Club is situated on 20,000 acres of rolling hills and meadows filled with rivers, ponds and wildlife. There are 300 gorgeous home sites spread out all over the property and an incredibly beautiful 18-hole Tom Fazio golf course. Our host, member and resident of the Preserve Club, Mr. Tony Thornley was very gracious to invite the entire team to practice at the club prior to our 11 AM tee-time.

After hitting a few balls and getting used to the seemingly perfect greens we walked to the first tee where we were greeted by a spectacular and very narrow opening tee shot. 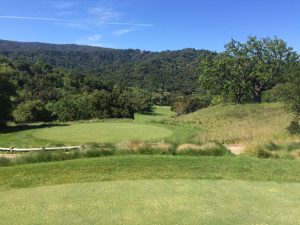 View from Hole 1, the Preserve Club

The first group was made up of Seniors Carl Jonson, Nico Maruri, and Kurt Kitayama as well as former UNLV men’s golf team member Christian Thornley all hit shots right down the opening fairway. In addition to being a former Rebel golfer, Christian is current Charley Hoffman Foundation Board Member. 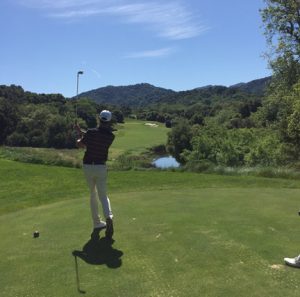 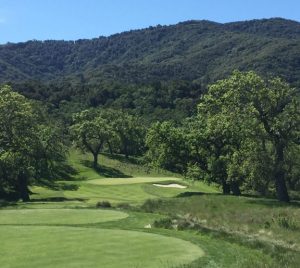 The par-3 6th hole at the Preserve Club

The serenity of playing the golf course is very difficult to describe. It was so incredibly peaceful walking all 18 holes as the course takes its golfers on a tour through the forest, into sprawling meadows and native grasslands, and then finishing up once again in the dense green Monterey Pines. There are zero distractions taking you away from challenge and character of the course along with the wild turkeys and deer that stroll the fairways along your side.

After finishing our round we drove the same winding road we came in on to Mr. Thornley’s house on the other side of the property. Mr. Thornley and his family gave us a tour of the breathtaking property and had a cookout waiting for us. 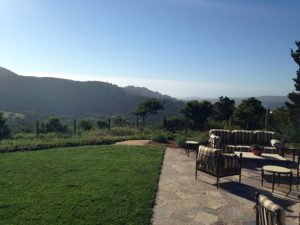 The view from the Mr. Thornley’s back yard reaches almost to the coastline, 8 miles away.

Mr. Thornley is a very generous supporter of UNLV Men’s Golf and we were very grateful to spend the day with him and his family sharing his passion for golf and the courses it is played on. We all owe a huge thank you to Mr. Tony Thornley, Gillian Thornley, Christian Thornley and Virginia for a fantastic day of golf, and an evening of dinner and conversation with a view!

That night as we headed back to the hotel the conversations about what course the “Mystical golf club” could be, reignited. Some said Pebble Beach, some said MPCC, some said they had no idea, but a few of us thought there were only two or three golf courses in the world that could ever be referred to as “Mystical Golf Club”, one of which was only a few miles away. Coach Knight and Rowe had held their lips shut the entire trip as to where we would be playing but their chuckles and small grins every time someone would ask, along with the title of the course in the itinerary, kept our suspicions up that it could only be the Cypress Point Club.

Once we arrived back at our hotel Sunday, the night finished as usual with our regular team meeting. That was the only usual part because shortly the news broke. “Tomorrow morning we have the opportunity of a very select few and will be playing the Cypress Point Club” Coach Rowe said to a crowd of dropped-jaws and astonished looks. It would have seemed that the golden ticket to Willy Wonka’s Chocolate Factory had just been handed out but the reality of the moment was that to a golfer, hearing that you have the opportunity to play the Cypress Point Club was just that. The mystique surrounding the club is undeniable and anyone with a passion for golf knows that the course is a golf architectural jewel and the club is in a class unto itself. 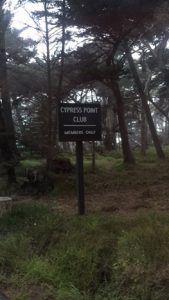 The entrance to the Cypress Point Club 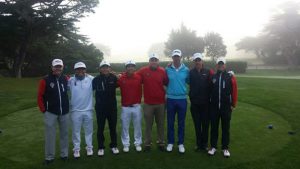 The first group led by the three seniors, Nico Maruri, Kurt Kitayama and Carl Jonson along with freshman Ben Davis led the way off the first tee. We were followed by the second group of Coach Rowe, Freshman John Oda and Shintaro Ban as well as Chistian Thornley. The course is split into three distinct sections with the first part working through the Del Monte Forest, the second part being routed through the dunes and the third and most incredible being played right along the ocean. 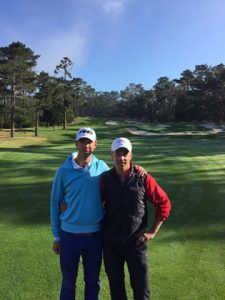 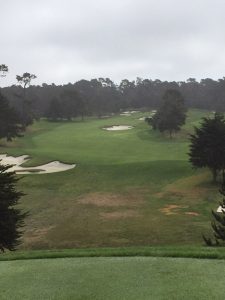 Looking up the 10th fairway at CPC 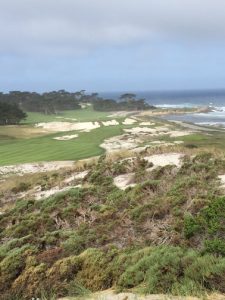 Looking towards the 13th green and 14th hole of CPC

Once we finished the 14th hole we crossed 17-mile Drive and followed a trail around a left hand corner unveiling the most incredible view in all of golf and beginning the last four holes alongside the water. 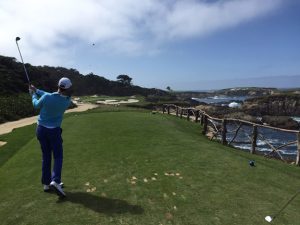 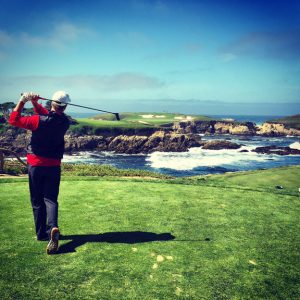 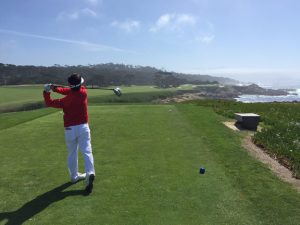 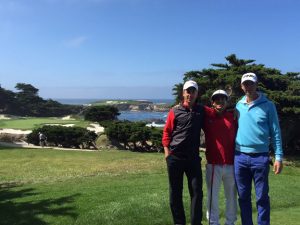 With just over two months left of school for the three seniors the last four years have gone by very quickly. Being able to experience this round will be something the three of us will never forget and a perfect moment during our tenure as Rebel Golfers.

Every description I have ever read or heard about the Cypress Point Club does not even come close to describing the unimaginable beauty and joy it is to walk the sacred grounds. Being a rebel golfer has many perks that every player on the team works extremely hard to enjoy and this day was one of the finest. Our round at the Cypress Point Club would not have been possible without the entire support of the Rebel Golf Foundation and our two very generous hosts, Mr. Andrew Hunter III and Mr. John Mccoy. We are so fortunate both of these gentlemen were able to share their slice of heaven with the UNLV golf Team. Thank you to everyone involved in making this trip happen!