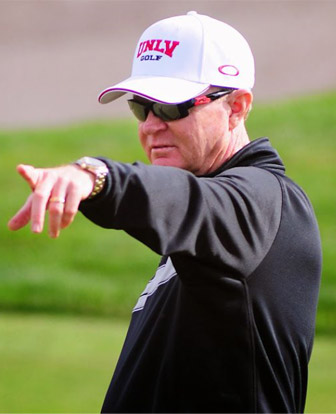 Over the last decade, Knight has helped 13 Rebel golfers earn the All-America Scholar award and four have been named Academic All-Americans.

Since Knight came to UNLV, 11 of his players have gone on to play on the PGA TOUR and eight of those are still active and have combined for 23 PGA TOUR titles, including Adam Scott’s win at the 2013 Masters.

2009 – So. Nevada Chapter PGA Golf Professional of the Year

1998 – Golf Coaches Association of America National Coach of the Year

1991 – Golf Coaches Association of America National Coach of the Year

“I couldn’t be where I am today without the program at UNLV and Coach Knight. Coach worked with me from the start and helped me with my short game and I saw immediate improvements. I still almost exclusively work with Coach on my short game. UNLV was the perfect university to go to for helping me get to where I am now in my career.” — Chad Campbell

“The golf program at UNLV played a big part in my golf education, helping me to prepare for life on Tour. Great facilities to use, great competition to play in and great friends made. I look back at my time at UNLV and have great memories. UNLV is a part of the journey that I am on and taught me so much. I am a proud Rebel!” — Adam Scott, Former UNLV golfer and current PGA Tour star

“Coach Knight is an incredible short game instructor and he has a vast knowledge of the game of golf. One of the things he constantly emphasized was the importance of the finishing holes in every tournament. I can’t even begin to count how many times his words rang true, with the finishing holes making the difference between winning and losing.” — Ryan Moore, Former UNLV star and current PGA Tour golfer

A two-time National Coach of the Year and 2002 GCAA Hall of Fame inductee, Dwaine Knight has been the driving force behind the tremendous success of Rebel Golf since his arrival in Las Vegas in the fall of 1987. Knight, who is in his 28th season at the helm of the UNLV men’s golf program, has nurtured Rebel golf from near-anonymity to one of the premier programs in the nation. In 1998, he guided the Rebels to their first-ever NCAA crown in Albuquerque, N.M. 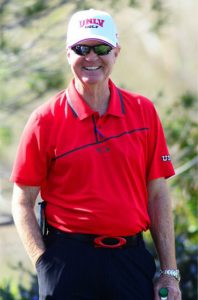 Knight has taken the Rebels to an unprecedented 18 trips to the national finals and coached them to 10 top-eight finishes. Additionally, he has led his team to a current NCAA-record 26 straight appearances at the NCAA Regionals. Under his tutelage, the Rebels earned their first-ever No. 1 ranking in 1993 and following the 1997-98 season, the team finished No. 1 in the nation in all polls.

A true teacher of the sport, Knight has tutored 42 All-Americans at UNLV, a National Player of the Year, a National Freshman of the Year, a U.S. Amateur Champion, three U.S. Public Links Champions, three Walker Cup participants and six Palmer Cup representatives. Additionally, two former Rebel golfers have gone on to play for the U.S. in the Ryder Cup.

Knight has captured three national titles (one team championship and two individuals), has won six conference championships and has developed 70 all-conference players. Over the last decade, Knight has helped 13 Rebel golfers earn the All-America Scholar award and four have been named Academic All-Americans.

“I am very proud of what we have accomplished at UNLV in my time here,” Knight said. “I can remember the first time we qualified for nationals (in 1989) and how excited we were just to make it there. Now I feel that we have moved to the next level where our players expect to go to nationals and are ready to compete for the national championship every year.

“Winning our three national titles (one team in 1998 and two individuals in 1991 and 2004) has been a dream come true for myself and the school. We felt that as a team we had been a serious contender prior to winning it all, and to get over the top really legitimized our program. Winning those championships is a reflection of the outstanding young men that we have had in our program and all of the hard work and effort they have given through the years, both on and off the golf course.”

Since Knight came to UNLV, 11 of his players have gone on to play on the PGA TOUR and eight of those are still active and have combined for 23 PGA TOUR titles, including Adam Scott’s win at the 2013 Masters. Knight came to UNLV from the University of New Mexico, where he served as the head coach from 1978-87. Eight of his players earned All-American honors and 14 were tabbed All-WAC. He led the Lobos to a league crown in 1979 and a fifth-place finish at the NCAA Championships that same year. In all, he led New Mexico to eight appearances in the national finals, including two top-10 finishes.

His most recent honor was being named the 2012 Sportsperson of the Year by ESPN Radio in Las Vegas. As its honoree, he was extremely active in charitable efforts benefitting the Nevada Childhood Cancer Foundation and The Caring Place.

He reached the pinnacle of coaching honors during the summer of 1997 when he was chosen as the United States’ captain for the inaugural Palmer Cup.

“It was a real honor to be thought of so highly by your peers,” Knight said of his selection as captain. “But it’s a real reflection on the type of players we’ve had and the support we’ve received from the university and the Las Vegas community. That’s where the real credit goes.”

An accomplished golfer in his own right, Knight played four seasons at New Mexico (1966-69) and played on the 1967 team that won the WAC championship and placed ninth at nationals.

Knight then spent five years (1972-77) on the PGA Tour, winning his first tournament — the Southwest PGA Championship — as early as his second season. After leaving the tour, Knight replaced Dick McGuire as New Mexico’s head coach in 1978. Knight remains a member of the Professional Golfers Association.

Knight and his wife Debbie have a daughter, Keely.