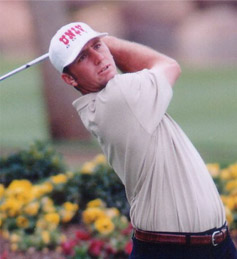 A 1998 second-team and 1997 third-team All-American, Bill Lunde was a Rebel golfer from 1993-98. The San Diego, Calif., native was a major part of UNLV’s 1998 national championship in Albuquerque, N.M., as he finished tied for 15th with a total of 281, which ranks tied for fifth in program history for best 72-hole Lunde averaged 71.83 per round in 1997-98, which ranked tied for 13th all-time for seasonal scoring averages at UNLV. He graduated in 1998 with a bachelor’s degree in economics.

A two-time first-team All-Western Athletic Conference player, Lunde placed fifth on the 2008 Nationwide Tour money list and earned his PGA Tour card. He spent his rookie season on the PGA Tour in 2009. In 2008, he earned his first Nationwide Tour victory at the Nationwide Children’s Hospital Invitational with chip-in birdie on the final hole for a one-stroke win.

He played in 27 events during the 2009 PGA Tour season, recording two top-10 finishes and five in the top 25. His best finishes of the year were a tie for fourth at the Frys.com Open and a tie for sixth at the AT&T Pebble Beach National Pro-Am. He earned over $825,000 during his rookie campaign.

In 2010, Lunde earned his first career PGA Tour victory when he won the Turning Stone Resort Championship in New York. He made 12 cuts that year and finished in the top 10 three times, giving him over $1 million in earnings in a season for the first time in his career.

As of January 2015, Lunde had totaled over $3.3 million in earnings on the PGA Tour. For his career, Lunde has played in 122 PGA Tour events, making the cut 67 times and finishing in the top 25 19 times. He has also turned in seven finishes in the top 10.

He also earned $1 million for winning the Kodak Challenge in 2011. The competition consisted of 30 PGA Tour holes — one at each of 30 tournaments throughout the season. The player with the lowest score on his best 18 Kodak Challenge holes wins the Lunde is a member of the UNLV Athletics Hall of Fame as the 1998 national champion squad was inducted in 2008.