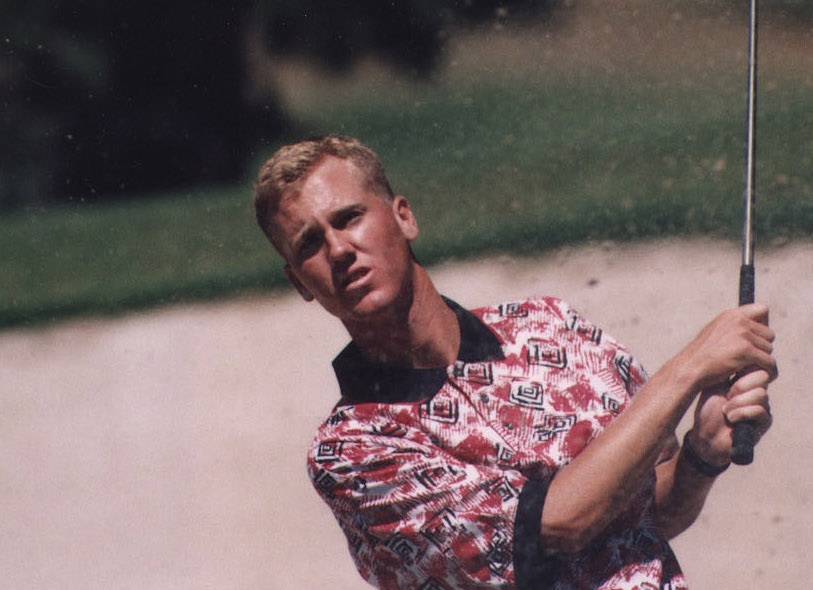 Chris Riley left UNLV as perhaps its greatest golfer ever. The skinny kid from California who sported a wide grin from the moment he hit campus in the fall of 1992, ended up turning in a highlight-stuffed career that included various firsts for a Rebel linkster.

As the school’s golf program grew in stature during the decade, so did Riley’s game. And consistency was his trademark. Consider that in 1996, he became the first male UNLV athlete ever to be named All-American all four seasons in college. In his career, he placed in the top-20 in 45 of his 59 career college tournaments (76 percent) and was in the top-five an incredible 21 times (36 percent). In fact, of 178 collegiate rounds, Riley carded 84 rounds par-or-under (47 percent). He also finished in the top-10 in six of his 12 career postseason tournaments (50 percent). In May 1996, Riley pulled the double deuce. Boasting a 72.65 career stroke average at UNLV, he captained his final team to a then-school-best second-place finish at the 1996 NCAA Golf Championships in Chattanooga, Tenn.

And, maybe most important, Riley capped off his astounding UNLV career by graduating in May of 1996 with a bachelor’s degree in communications. In 2006, he was inducted into the UNLV Athletics Hall of Fame.Riley played on the Buy.com Tour (now known as Nationwide) for one year before earning his Tour card at “Q School” in 1998. He went on to tie for seventh in his first Tour event, the Sony Open in Hawaii, where he won more than $75,000.

Riley has maintained his tour card since 1999 and has steadily climbed up the money list. In 2003, he finished 23rd on the money list with just over $2 million in earnings. He recorded his first win in 2002 at the Reno-Tahoe Open and in 2004 he played for the U.S. in the Ryder Cup.

In 2010, he had three top-10 finishes, including fourth at the Travelers Championship and in 2011, his best was a tie for ninth at the Sony Open in Hawaii. For his career, Riley has earned more than $11.5 million on the PGA Tour, finishing second four times, in the top 10 on 33 occasions and in the top 25 88 times.

In 2017, he became the University of San Diego head golf coach.