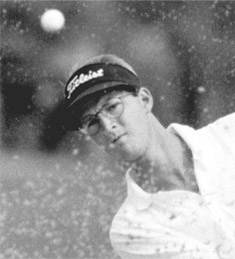 When Ed Fryatt returned to his hometown to play for the Rebels, it marked the launch of the program that would go on to untold success. The Las Vegas native and Nevada high school champion originally enrolled at BYU, but quickly transferred to UNLV a year later. While wearing the Scarlet and Gray, he led the Rebels to three straight NCAA Championship appearances, including an unprecedented fourth-place finish in his first year.

A three-time All-American, he won the Big West Conference’s 1993 Player of the Year award after capturing the league’s individual championship. He graduated from UNLV in 1994 with a degree in business management.

Following his success at UNLV, he was a mainstay in the professional ranks. Fryatt played on the Nationwide Tour (formerly the Nike Tour) in his first year out of school, earning about $25,000. He earned a living there until 2000, when he battled his way up to exempt status in the big league. Fryatt held his tour card for three years, piling up more than $1 million in earnings. His best finish was a tie for third at the 2000 MCI Classic.