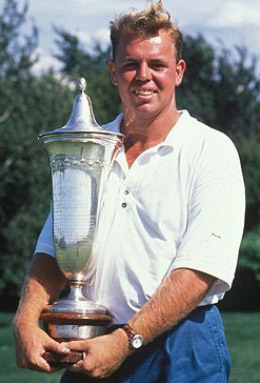 PEBBLE BEACH, Calif. — UNLV sophomore Warren Schutte made NCAA history in 1991 at one of the most beautiful golf locales in the world. Schutte shot a tournament-low round of five-under par 67 at Poppy Hills to become the first foreign-born player to win the NCAA Golf Championships. He also became the first UNLV Golfer to win an NCAA title.

“The key for me today is that I played the par fives at six-under and had four eagle putts,” said Schutte, of Durban, South Africa. Schutte’s four-day 72-70-74-67–283 was good for a three-shot victory over David Duval

“Absolutely incredible,” Schutte’s coach, Dwaine Knight, exclaimed after watching the Big West Conference Player of the Year win his fourth straight tournament on the strength of six birdies and an eagle. “Physically and fundamentally his game has improved, but the biggest improvement he has made is mentally. His composure now is one of the best I’ve ever seen.”

Schutte’s a Hall of Famer 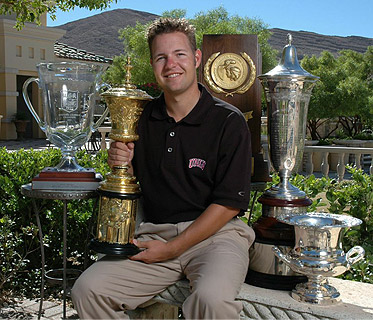 HOT SPRINGS, Va. — UNLV junior Ryan Moore won the second individual men’s golf national championship in school history as he completed his final round with a 66 at the NCAA Division I Men’s Golf Championship.

Playing in a steady, cold rain, Moore, the nation’s second-ranked player, won the title by six strokes over Wake Forest’s Bill Haas and Arizona’s Chris Nallen, ranked No. 1 and No. 4 respectively.

With the victory, Moore brought home UNLV’s third national title in men’s golf. Warren Schutte won the individual crown in 1991, and the Rebels captured the team title in 1998.

Dwaine Knight said. “I thought it was a fabulous round when he needed it. He’s been so consistent all year, and this was another great round under tough conditions.”

Moore said. “I was just out there trying to take care of my own business and play the way I knew I could. I knew, with a couple of shots lead, that if I went out and played a solid round, then I’d be virtually uncatchable, especially with the rain and the conditions today. It was that irritating weather, which kind of gets to you after a while. But I wasn’t going out there thinking I could shoot 72 or 73 and pull it out. I knew I had to play good.”

Ryan Moore is Most Heralded Rebel Golfer in History 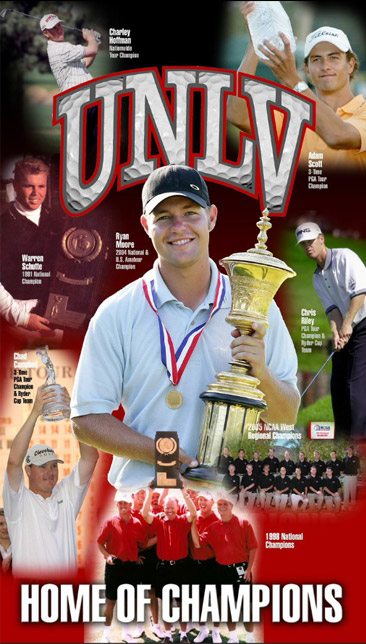 Former Rebel golfer Ryan Moore experienced unequaled success at the collegiate and amateur levels beginning with the summer of 2004.Moore’s college career, which ran from 2001-05, was unparalleled, both in terms of his senior-year accomplishments as well as his sustained performance while competing for UNLV.

In his senior year alone, he competed in nine college events, winning three times and finishing third in three others. In fact, he never finished lower than sixth place in any of the tournaments he played Moore also capped his final year with a fifth-place finish at the 2005 NCAA Championship, an event he won in 2004. His 28-round scoring average of 69.29 was tops in the nation and set the UNLV seasonal record. For his college career, he played in 136 rounds and turned in a scoring average of 70.76. He also placed 13th at the 2005 Masters, earning him low amateur honors and a return trip to Moore’s incredible senior season was rewarded with the recognition of winning every major player of the year honor that is given out in collegiate golf – the Ben Hogan Award, the Nicklaus Award and the Haskins Award. Moore became just the second UNLV student-athlete to win his respective sport’s national player of the year award – the first was men’s basketball’s Larry Johnson in 1991.

Moore also received national attention when he set a new standard in amateur golf in 2004 by winning five major amateur championships, a feat that may never be matched. He captured the U.S. Amateur, the NCAA, the U.S. Amateur Public Links, the Western Amateur and the Sahalee Players Championships to become the first golfer to ever win all five events in the same year.

The four-time All-American became just the third UNLV golfer in program history to earn first team honors twice (2004 and 2005). He also captured the Golfstat Cup title in 2004-05, which is awarded annually to the college golfer with the lowest yearly scoring average as was the nation’s top-ranked player for the entire season. His 69.29 was the second lowest seasonal scoring average in Moore was also named the Mountain West Golfer of the Year for the second straight season in 2004-05 and made the All-MW team for the fourth time. He captured UNLV’s Sportsman of the Year award all four of his years at UNLV. Moore had the opportunity to turn professional after his junior season, but chose to return to school for his senior year.