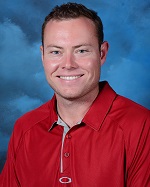 UNLV: Begins his fourth year with the Rebels … Is a member of the UNLV Student-Athlete Advisory Committee (SAAC) as a representative from men’s golf … Has played in 29 tournaments, totaling 84 rounds … Has a career scoring average of 73.75, which currently ranks 29th in program history … Has recorded 11 top-20 finishes, six top-10s and four top-fives … Has 19 rounds at par or better.

2014-15: Made the Dean’s Honor List for the second straight year … Played in six tournaments, totaling 18 rounds … Turned in a top-five finish when he tied for second at the Gene Miranda Falcon Invitational and shot four rounds at par or better … Tied for 21st at the NCAA Regional in Noblesville, Ind. … Shot three rounds in the 60s including a career-low 65 during the second round of the Southern Highlands Collegiate Masters, which ties for the 21st-lowest round in Rebel golf history … Had a seasonal scoring average of 73.72 … Won the 2015 Nevada State Match Play Championship during the summer by defeating former Rebel All-American and former PGA Tour player Edward Fryatt, 3 and 1, in the final match to win the prestigious state title … Fryatt was the top-seeded player in the tournament.