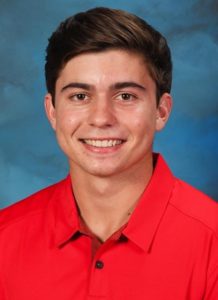 HIGH SCHOOL: A 2017 graduate of Joseph Gregori High School in Modesto, Calif. … Was a four-time California Interscholastic Federation (CIF) State Finalist qualifier and three-time Boys Junior Americas Cup team member. He was a five-time winner of Junior Golf Association of Northern California (JGANC) tournaments and was named its 2016 Player of the Year … Coached by Brad Stewart and earned varsity letters all four years of high school … His team won the Sectional Championship in 2017 … He tied for first at the Modesto City Amateur during the summer of 2017 … Once made a hole-in-one on a par 4 … Also played basketball at JGHS and was the freshman team’s Most Valuable Player in 2014 and was the Offensive Player of the Year for the Jaguars in 2015.

PERSONAL: Chris David Ebster was born March 19, 1999, in Modesto, Calif. … Majoring in communication … The son of John and Dana Ebster … Has one sister: Makena (14).