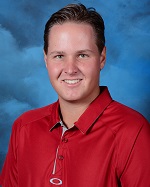 UNLV: Begins his third year with the Rebels … Has appeared in eight tourna- ments, totaling 22 rounds.

2014-15: Played in two tournaments, totaling six rounds … His best finish was a tie for 34th at the Jerry Pate National Intercollegiate … Had a scoring average of 74.17 … Tied for second at U.S. Amateur Qualifying during the summer of 2015 becoming an alternate … Qualified for and made cut at 2015 California State Open.

2013-14: Was named to the Academic All-Mountain West team as well as the Dean’s Honor List … Played in six tournaments, totaling 16 rounds … His best finish was 16th at the Carmel Cup … Finished in the top-20 twice and shot par once and was under par twice … Had a scoring average of 75.50, which was sixth on the team and second among freshmen.