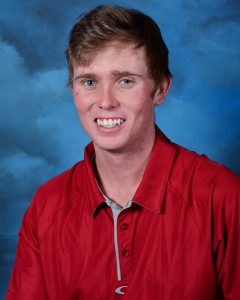 UNLV: Begins his third year with the Rebels … Is a member of the UNLV Student-Athlete Advisory Committee (SAAC) as a representative from men’s golf … Has appeared in eight career tournaments, totaling 23 rounds.

2014-15: Played in three tournaments, totaling nine rounds … Recorded two top-20 finishes, including a top-10 and shot five rounds at par or better … Turned in his best career finish at the Jackrabbit Invitational when he finished sixth … He also tied for 18th at the Southern Highlands Collegiate Masters where he held the individual lead after each of the first two rounds … Shot three rounds in the 60s, including career-lows of 65 during the first round of the SHCM and second round of the Jackrabbit, tying him for 21st for low round in Rebel golf history … His 54-hole total of 205 at the Jackrabbit is tied for 27th lowest tournament in program history … His turned in a seasonal scoring average of 71.89.