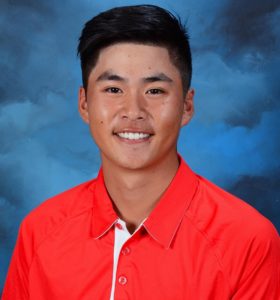 Read All UNLVMensGolf.com Articles About Shintaro

2016-17: Earned honorable mention All-America honors in addition to PING All-West Region (second straight year) … Named a Cleveland Golf/Srixon All-America Scholar … Earned All-Mountain West honors for the second straight year … Also earned Academic All-MW accolades for the third straight time … Played in 15 tournaments, totalling 43 rounds … His 71.26 seasonal scoring average ranked second on the team and seventh in UNLV history … Had 10 top-20 finishes, seven top-10s and five top-5s … Shot par or better in 29 rounds and was in the 60s on 12 occasions … His best finish was a tie for second at the ASU Thunderbird Invitational … His 62 at that event was the lowest round by a Rebel in history and his total of 201 ranks tied for seventh in program history … Also finished third at the Gene Miranda Falcon Invitational, the William. H. Tucker Intercollegiate and the NCAA West Lafayette Regional … Earned Outstanding Rebel of the Week on May 24 … Tied for second at the Northeast Amateur and was also second at the Canadian Amateur Championship … Was runner-up at Northern California Match Play and had top-10 finishes at both The Monroe Amateur and Sunnehanna Amateur.

2015-16: Earned PING All-West Region honors … Was named a member of the All-Mountain West squad … Also earned the Academic All-Mountain West award … Was named the MW Golfer of the Week on April 19 and Outstanding Rebel of the Week on April 13 … Won the California Amateur Championship … Made history at the more than 100-year-old event as it marked the first time a pair of brothers have won it (Shotaro, who played at Cal, won the 2015 title) … Also won the NCGA Amateur Match Play Championship, joining a list of only 10 players over the span of a century who have ever won both tournaments in the same year … Named the NCGA Player of the Year … Played in 12 tournaments for the Rebels, totalling 34 rounds … Ranked third on the team in scoring average with 72.65 … Had six top-20 finishes, five top-10s and two top-5s, while recording 15 rounds at par or better … Earned individual medalist honors for the first time in his career at the Robert Kepler Intercollegiate … His low round for the year was a 68, twice during the LMU Invitational … Shot in the 60s on three other occasions.

2014-15: Named to the Academic All-Mountain West team … Played in eight tournaments, totaling 24 rounds … Recorded three top-20 finishes with six rounds at par or better … Had two rounds in the 60s with his low round of the year being 69 at both the Jackrabbit Invitational and The Goodwin … His best finish was a tie for 13th at the Mountain West Championship … He also tied for 14th at the Jackrabbit and 20th at the Robert Kepler Invitational … Had a scoring average of 73.58 … Tied for 10th at the California State Amateur (lost in round of 16) … Tied for seventh at the Sahalee Players Championship and tied for eighth at the Pacific Northwest Amateur, losing in the finals … Also tied for 25th, losing in the semifinals at the NCGA Matchplay Championship.

HIGH SCHOOL: A 2014 graduate of Archbishop Mitty High School in San JosÃ©, Calif. … Won the Junior Golf Association of Northern California Championship match-play event and helped Northern California capture the 2012 Junior America’s Cup … Named the 2013 JGANC Player of the Year and was the points leader … Also played in the 2013 Junior America’s Cup … Won the 2014 San Francisco City Men’s Amateur … Ranked as the 39th-best player in his class by Golfweek.com … Was a co-medalist at the 2012 U.S. Junior Amateur and qualified for the 2013 U.S. Amateur … Finished 12th at the 2013 Toyota Tour Cup and was 16th at the 2013 Junior Americas Cup … His high school team went undefeated during his senior year … Won its conference title all four years he was a member of the team … He turned in an average score of 1-under par … Coached by John Mosunic … He also competed in high school as a swimmer.

PERSONAL: Shintaro Greg Ban was born Feb. 27, 1996, in San JosÃ©, Calif. … Nickname is Baby Seal … The son of Hideyuki Ban and Susan Chang … Majoring in economics … Hobbies include video games and dancing … Has a brother, Shotaro (24), who played college golf at California.